Peace talks between Colombia and the National Liberation Army (ELN) may have just been canceled a week ago but, given today’s developments, they now belong to the ancient past. Following recent attacks on police, the leftist paramilitary group announced Wednesday that it is planning a three-day blockade beginning Saturday to protest the stalled peace talks, according to an official announcement from the ELN.

The announced blockade will take place from Saturday at 6am local Colombian time until Tuesday morning and will mainly affect the western province of Chocó where ELN is based.

“We call on transporters and passengers to abstain from travelling to avoid inconveniences,” the statement said. 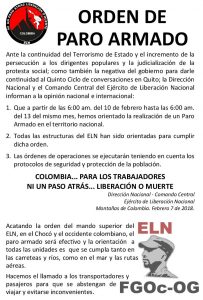 Following a string of attacks, the deadliest of which resulted in five officers killed at a Barranquilla police station, Colombian President Juan Manuel Santos suspended peace talks last week between the government and the ELN that were taking place in Quito, Ecuador. The two sides have been trying to reach an accord since February of last year as part of Colombia’s planned peace proposals that would end more than 50 years of Civil War.

Sergio Guzmán, an analyst at the Colombian branch of the security advising firm Control Risks, said the blockade will likely not force the government’s hand on anything politically and that it will continue to tire the Colombian people who have long held disdain for the armed actors in the country’s constant war.

“It is unlikely the group’s actions will effectively pressure the government to resume peace talks in the next month, although the government will continue to face mounting pressure for international bodies – the UN in particular – to continue negotiations,” Guzmán wrote to Colombia Focus. “I do think that this needs to be taken seriously given recent precedent, but it is very likely to cause increased disdain for the ELN.”

He added that continued actions like this blockade from ELN will only add to the appeal of presidential candidates who espouse hard discipline against the paramilitary groups come election time in May.

In January, a temporary ceasefire between the two sides expired, leading to the string of ELN attacks on police and military. Whereas the Revolutionary Armed Forces of Colombia (FARC) have put down their weapons and controversially joined the political realm where they will vie for spots in the upcoming congressional and presidential elections, the ELN has continued to be the main aggressor thwarting the Colombian government’s 2016 peace deal.