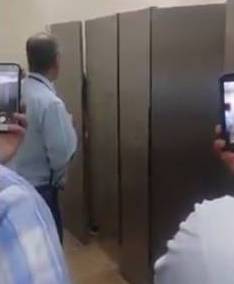 The men were evicted and videotaped in accordance with the shopping mall protocols for these cases. Nonetheless, images were somehow leaked to social media, where the chief of security can be seen physically and verbally abusing from one of the men.

“You will respect the shopping mall’s bathrooms. This is not a brothel, that’s why motels exist. You are being recorded because this is disrespect.”, said the chief of security to these men in the video, while forcing one of them, who was also elder, to get out from the bathroom.

The chief of security also prohibited the men from ever re-entering the mall and threatened to evict them again if they were found within the mall facilities. At the end of this footage, the employee is seen striking one of the men and insulting the other, who refused to come out of the bathroom.

Mayorga’s “Megaplaza” said that the eviction was only recorded for safety and legal reasons and that they do not discriminate against people by gender, religion, socioeconomic status or by any ideology. They also added that they haven’t had any contact with these men, but that the prior decision was reversed and they would be allowed to enter the mall once again.