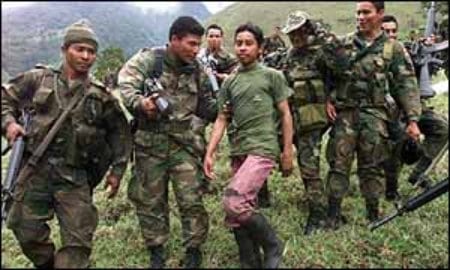 The rocky road towards peace just took another bump in Colombia as authorities captured ex-FARC head Seuxis Hernandez, known through his alias Jesús Santrich, on charges of drug trafficking and money laundering. Santrich, who was arrested in his residence in Bogotá, participated on behalf of the FARC in the peace deal process in 2016.

The Prosecutor’s Office said in a Monday statement that Santrich was in possession of 10 tons of cocaine worth $15 million that was going to be sent to the U.S. Because the arrest was done via an international warrant from Interpol, prosecutors said Santrich could be extradited to North America.

President Juan Manuel Santos said in a televised appearance Monday afternoon that, due to the proof prosecutors have shown him, his “hand would not tremble in authorizing the extradition.”

In a written statement follow-up, Santos admitted that Colombia’s transition into peace is not going to be an easy one.

“The construction of peace requires absolute compliance and respect for the law,” Santos said. “This is what the Colombian people demand. In this, there can be no leeway or weakness.”

FARC leaders and soldiers were controversially granted amnesty as part of Colombia’s peace deal. However, Santos said, the law is clear in wording that new crimes after the fact will be prosecuted.

“The accord is clear: he who commits the crime after the signing of the final deal will be subjected to normal jurisdiction for these any committed crimes,” Santos added.

Authorities from Interpol said in a statement that Santrich met with a cocaine distributor last November in Bogotá where they discussed the shipment of the 10-ton product to the U.S.

The arrest stokes worries from the U.S. and international analysts that the FARC and other guerrilla groups putting down their weapons will not be able to quit overseeing the illicit, underground industries involving drugs, timber, and gold in Colombia.

“This is the worst moment that the peace process has gone through,” said the former FARC official Iván Márquez, according to the Associated Press.